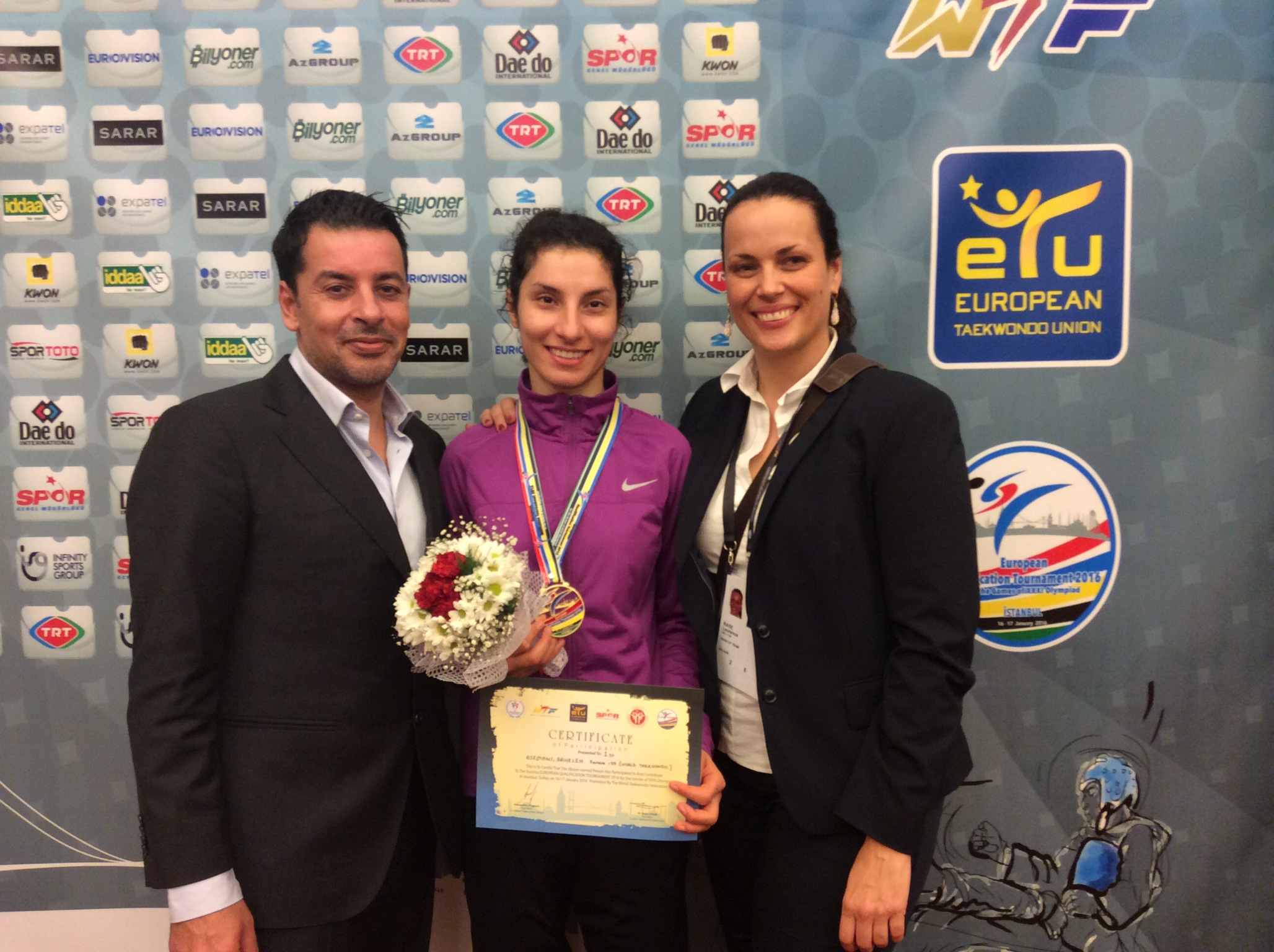 Raheleh Asemani is an athlete without borders: An Iranian-born refugee, she has been fighting under the wing of Team Belgium. But now – after special changes to the WTF’s Olympic Standing Procedures  – she is the first refugee athlete ever to quality for Olympic taekwondo.

Being the best of the best is a daunting proposition – and for taekwondo’s elite, the road to Rio 2016 has been paved with tears.

Endless hours of tactical training; endless hours of physical conditioning. The drudgery of nutritional plans; the pain of injury management. Long, long flights to places as far apart as Mexico and Moscow. Pre-event analyses of opponents and pre-fight tactical planning.  The all-too-short battles on the mats; the agony of defeat and the ecstasy of victory.

But one athlete who has fought through to Rio has walked an even tougher road than most – for Iranian-born refugee Raheleh Asemani does not have a nation to fight or a flag to fight under.

Fortunately, however, she has found a national team to support her Olympic odyssey.

Born in Karak, Iran, in 1989, the young Asemani first wanted to do gymnastics, but, on her father’s advice, took up taekwondo. That was in 2000. Tall, lithe and with a whip-like round kick off both her front and back legs, her promise in the sport soon became obvious: By 2009, she was a professional on the highly competitive Iranian circuit.

However, there were issues. “I was always number one in Iran, but my opportunities were limited,” she told website “Fans of Flanders” in a 2015 interview. In 2012, she became a refugee for reasons she does not wish to disclose and arrived in Belgium.

As a former Iranian top gun – she had been an Asian Games silver medalist for Iran in 2010 – and a new resident of the European nation, she found a warm welcome with Team Belgium.  “I train every day in Belgium,” she said. “My coaches are Karim (Dighou) and Laurence (Rase) and I have very good relations with them – they know me very well.”

In the European nation, she found a job as a postwoman and mastered the language. But she kept on kicking, fighting in an array of tourneys around the continent. Facing political, nationality and financial problems, life was a struggle but in the 2015 taekwondo season, her form peaked. She won bronze in the -57kg class in the Spanish Open, and golds in the same division in the Austrian, Croatian, Polish and Serbian Opens.

Yet despite these successes in the area, as a non-European she was unable to compete in the European Olympic qualification tournament in Istanbul.

“It has been such a hard journey, I was lost,” she said. “Many times in my head I thought it would not happen because of politics, visa problems, lack of money, and I couldn’t travel to [many] ranking events.”

Fortunately, help was at hand. With the IOC calling on its member International Federations to grant refugee athletes a chance, the WTF asked its Continental Unions to vote on necessary changes to their Olympic Standing Procedures to permit this. The European Taekwondo Union did so – and the decision was unanimous. Asemani was in.

In Istanbul, fighting under the WTF flag, she rose to the occasion. In the finals of the female -57kg category, she faced Finland’s Suvi Mikkonen. It would be a battle of contrasting styles: The shorter, more aggressive Finn firing off a full arsenal of techniques, against the leggier more tactical refugee plying a world-class front-leg.

The first round kicked off with both girls foot sparring; the Finnish girl looking more aggressive against Asemani’s height advantage. Mikkonen racked up the points, establishing a 3-1 lead; only in the final seconds of the round did Asemani start returning the pressure, manouvering her opponent to the edge of the mats.  In the second, Asemani started more actively – only to go down after sustaining a blow to her key weapon, her front, right leg. She rose gamely – but suffered another shot to same area. After a brief pause, she continued; her conditioning paid off as she started using the battered leg to hunt the Finn’s head. But she could not connect and visited the mats yet again after a body clash.

Fighting resumed. Now, having been down three times in the round, and behind on the scoreboard, she showed the heart of a champion. Raising her leg to high chamber, she caught Mikkonen in the jaw with a round kick for three points, bringing the board up to 3-4 in her favor. The final seconds of Round 2 were action packed, as Mikkonen wielded ax and back kicks against Asemani’s turning kicks. The round ended 3-4.

In the final round the action was more intense, both girls showing a high work rate, but it was Asemani whose range-finder was on target: as Mikkonen fought forward, Asemani seized the moment and planted her side kick in Mikkonen’s chin. It was the decisive strike. Although Mikkonen remained game until through the dying seconds, the fight ended 7-3
to Asemani. Both girls won places to Rio – but it was Asemani, who, having proven her caliber by taking the top slot, looked both delighted and relieved. 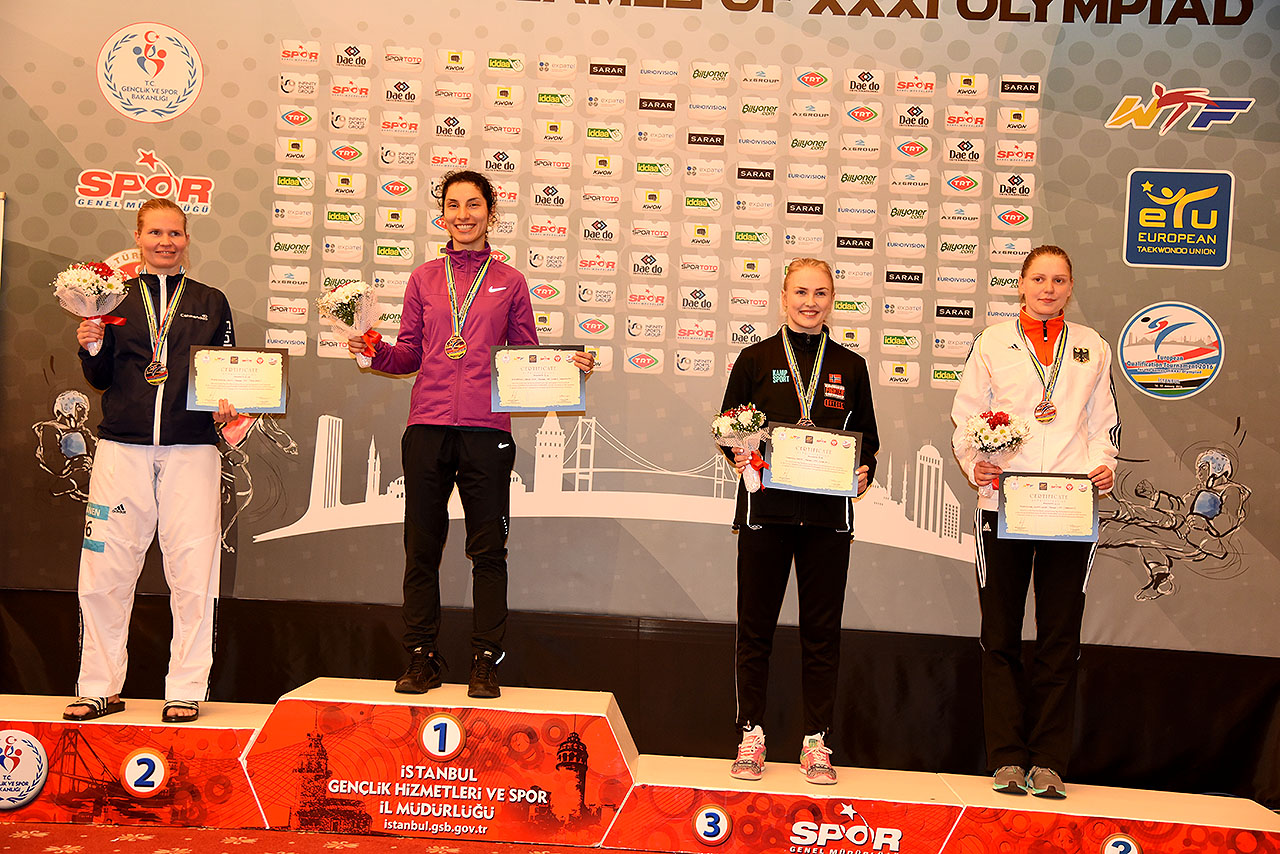 “I work in a post office, I run from house to house delivering letters – but today I was delivered an Olympic ticket,” she said. “I am going to Rio!” “I want to thank the WTF and especially [WTF President] Dr Choue for his humanitarian efforts,” Asemani continued. “It is amazing that I have this opportunity as a refugee in Belgium, and I am so pleased that the IOC is bringing hope and fairness in this way.”

Although Asemani had fought under the WTF, rather than the Belgian flag, Team Belgium was equally upbeat.

“If this was a movie, nobody would believe it was possible….it’s an incredible moment for all of us!” said Performance Director Rase. “Rio will showcase that taekwondo cares – and that Belgium is ready.” “I am living a dream now!” said Coach Dighou – who had already defied Belgium’s small size by qualifying two athletes for Rio via the elite Grand Prix circuit. “It is so special, our Belgian team is a family – we care about each other and we support each other – and Rio is going to be special for us. What a movement!”

The next months are going to be busy ones for the refugee Olympian. Asemani plans to continue her job in the postal service during the day – “I’m a post women and after the Olympics I want continue my job because I want to construct my life” – and her pre-Olympic workup with Dighou, Rase and Team Belgium after hours.

She remains in close contact with her family in Iran, speaking to her father every day. It is her family, rather than her nationality, that has kept her going, she told “Fans of Flanders:” “When I do taekwondo, I do it for my dad and my family.”

She also has a boyfriend of four years and there may be a future there: “He helps me for a good victory in Rio,” she said. ”Maybe after Rio we can have a plan.”

But for now, Asemani’s hopes are no different to those of every other elite fighter.

“Rio is a dream for me,” she said. “Hope has carried me to the Olympics, now I will give all I have to win.” 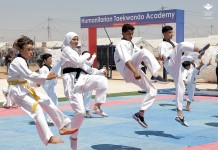 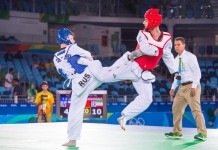