BURNABY, Canada (Nov. 20, 2016) – Every tournament organizer secretly hopes that a hometown player will win: It adds that extra “oomph” to a competition and is sure to ignite not just the crowd, but the local community, too.

The final of the female -59kg category pitted Park against the smaller Yen Hsin Yeh of Chinese Taipei. Almost at the opening bell, the hometown girl went one up with a body kick, prompting a fierce firefight as Yeh fought back. But it was Park who extended her lead to 2-0, then 3-0 – the last with a thwacking round kick to the body that drew gasps and cheers. Some messy clinchwork followed before regular action resumed. Both girls then exchanged a series of head shots. The round ended 3-0 to Park.

In the second, Park again wasted no time, scoring with a fast head kick – then another – before tumbling to the mats after Yeh connected with a head kick of her own. The board surged to 12-3, but the lass from Chinese Taipei was still in the fight. She counterattacked with determination – but it was the Canadian fighter who landed yet another head kick. By now, she was looking very, very dominant. A break in the torrid action was called, with the bout at 15-4, as Park’s torso armor was re-secured. Park landed a picture-perfect side kick that did not register on the PSS, then was forced out of the ring. Both girls clinched and fired head kicks, the two fighters’ techniques almost canceling each other out. But Park’s technical mastery and excellence of technique were becoming evident – she scored with a side kick from the extreme close range. The round ended 16-5.

As the bell rang on round three, Yeh had everything to fight for. Both girls were now fighting using the entire ring to manoeuver – with Park again unleashing a textbook side kick. Then Yeh landed an out-of-nowhere head kick, raising her score to 8-16. There was a brief slowdown – the prior tempo had been too fast – then Park’s cut kick scored again for 17-8. Yeh was looking desperate. She hopped across the floor, flicking our leading leg on the high line, hunting Park’s head; the Canadian did well to evade. Then – suddenly – it was all over: The Canadian impacted with a head kick that gave her the victory on a 20-8 point difference. It had been a fine performance of clean and stylish taekwondo that delighted both the crowd and her teammates.

Park bowed to the crowd, dashed to the stands, grabbed a national flag and stormed back onto the stage – where a duo of beaming Mounties,  in full dress uniform, joined her for an impromptu (and unscheduled) victory celebration. And if the ringside hug between Park and her coach looked particularly tight, it was – they are also daughter and father. 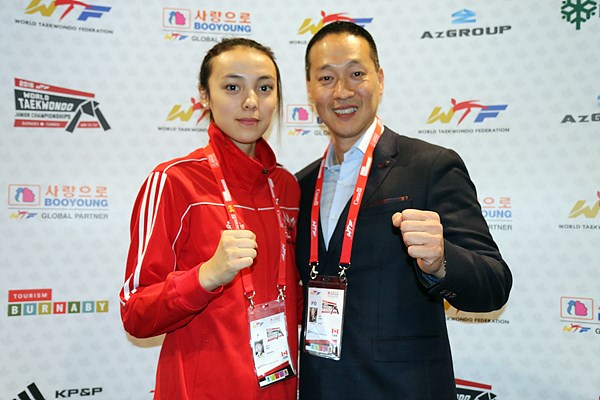 Park’s seizure of a world championship title was, perhaps, predestined: she has not two, but three generations of taekwondo blood running through her veins. The daughter of Master Jae Park (her coach) she is the granddaughter of Master Deuk-hwa Park, who migrated from Korea to Canada in 1977; out of his ten grandchildren, nine hold black belts. The family runs a successful dojang in Winnipeg.

With this pedigree, it is not surprising that Park, 17, has been doing taekwondo “since I could walk.” Her father recognized that she had the strong mind that the sport demands as early as age three. Today, she wears a third-dan black belt.

The gold-medal match went according to plan. “It was just to go there and fight with confidence, to fight how I know I can,” she said. “The plan was to go in strong from the beginning.”

She plans to transition up to seniors, and has already gone toe-to-toe with world-class senior competition at the Dutch and Belgian Opens in 2015. In the Dutch competition, she faced off against 2016 Olympic silver medalist Eva Calvo Gomez, losing just 6-3. For a junior to lose by such a small margin to one of the top players in the game suggests stratospheric potential.

With junior ranking points now being transferable to the seniors, she expects to be competing in the elite Grand Prix series next year. “In the Olympic division at -57kg, she will be in the top 15,” her father said, confidently. As for her ambitions in the sport she is – naturally – looking over the eastern horizon toward the Tokyo in 2020.

But life will not just be taekwondo: She also hopes to go to university next year, though she is not yet clear on what her major will: “Something sport related,” she said. 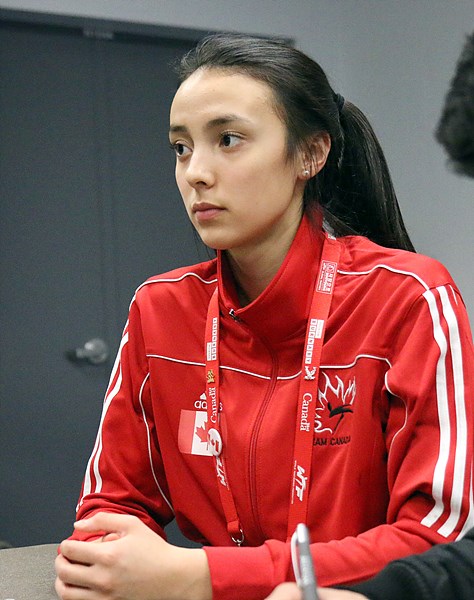 In terms of techniques, she said, “I like my side kick as a base – but I like to do fancier kicks when I can.” In terms of physique, her father reckons his daughter is perfectly engineered for the sport. “Her body is made for taekwondo: She is long and lean, she has fast-twitch muscles – she has all the attributes to succeed in taekwondo,” he said.  “And she can do all her techniques on both sides.”

How about her mind game? Her father comes back with a surprising answer.

“Her mental game is weaker than more than 50 percent of the athletes – and that is part of the plan!” Park Sr confided. “Athletes that have a strong mental game at the beginning do not emphasize the physical so much, as they get away with using strategy. In my opinion, strategy can come later on, but if you don’t develop a physical base it is too late – the body only gives you a certain amount of time to develop; the mind can always develop.”